Aftershocks of the Pandemic

The corona crisis can undoubtedly be called an earthquake for the global economy. Now that the pandemic seems to be behind us, at least in our kind of countries, we are still experiencing unprecedented aftershocks. Some of them are negative, others positive.

In China, the virus has not yet been contained, according to the authorities, and there are still substantial restrictions in public life, although these are now being scaled back. The effects on the Chinese economy are evident. In April, manufacturing production was 2.9% lower than a year earlier, after +5.0% in March. Retail sales are also taking a hit. Turnover in March was already 3.5% lower than in March 2021; in April, it was -11.1%. Not all that much better than just after the pandemic broke out. It is inevitable that we will notice this in new problems with deliveries from China. 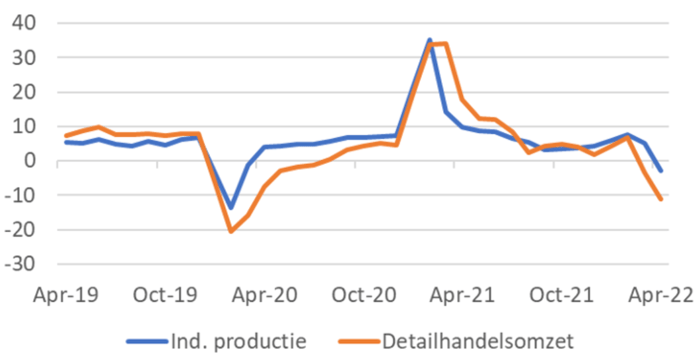 The Chinese economy has already cooled without the lockdown measures of recent months. The number of homes under construction, long an important growth engine, has been declining for some time. The number has been lower since August last year than a year earlier. In April, that counter stood at -28.4%. Sales in April were 32.2% lower than in April 2021. The mood indicator for the real estate market has also fallen sharply in recent months. It is not surprising that this week the Chinese central bank reduced the reference rate for mortgages for the second time the current year. 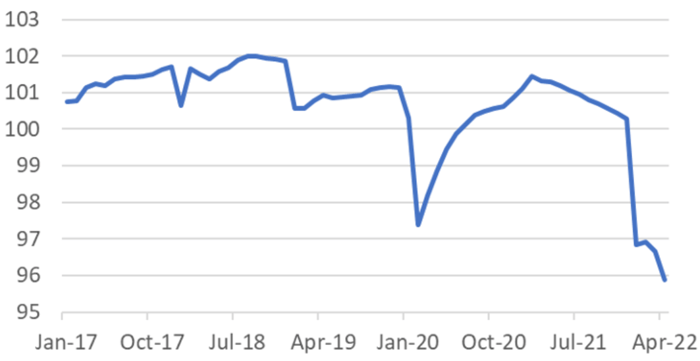 Opposing signals from the US

The US economy also appears to be experiencing aftershocks. Everyone knows that inflation has risen sharply and remains stubbornly high. The following chart shows that the rapidly growing mortgage interest rate is already taking its toll on the housing market. The number of existing homes sold has fallen since the beginning of the year from about 6.5 million per month (annualized) to about 5.6 million, or just under 15%.

US: Mortgage interest and sale of existing homes 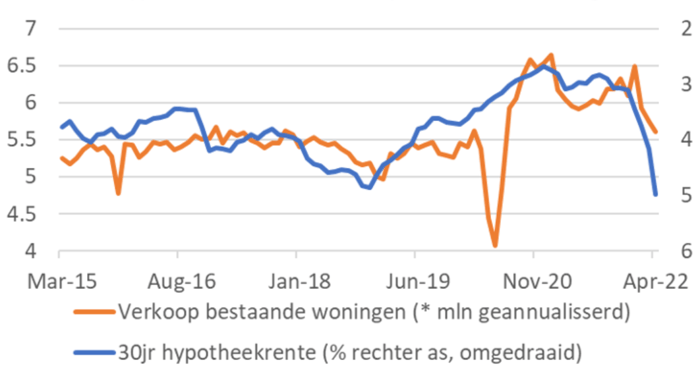 Not surprisingly, then, the NAHB index, which measures sentiment among homebuilders, fell for the fifth consecutive month in May: 69 from 77 in April and 84 in December 2021. The NAHB Chief Economist said: “The housing market faces growing challenges. Building material costs are up 19% from a year ago; rates have surged to a 12-year high in less than three months. Based on current affordability conditions, less than 50% of new and existing home sales are affordable for a typical family”.

The first indications of how producer confidence is developing are not favorable. The Empire State index (New York Fed) and the Philly Fed index fell in May. The Philly Fed index peaked at 2.6, the lowest level since May 2020, from 17.6 in April.

On the upside, there was also something to note in the US this week. Retail sales, for example, continued to grow strongly in April, although the picture is distorted by the rise in inflation. Production in the processing industry is also steadily increasing. I find the following chart quite intriguing. In the six years before the pandemic, manufacturing output in the US barely grew on balance, and the index hovered around 100 throughout the period. Production fell sharply when the pandemic broke out and the economy shut down. Recovery followed after April 2020. It took more than a year before the old production level was reached again, but now the increase in production seems unstoppable. Somehow, there seems to be more dynamism in the US industry than before the pandemic.

The stagnation of the Dutch economy in Q1 is too pessimistic

Private consumption also fell slightly in real terms (-0.1%). That surprised me and seemed to be at odds with the relatively strong retail sales data. The CBS told me that the setback in household consumption was probably mainly caused by the weather. The milder weather than a year earlier and Q1 led to lower energy consumption. That depresses family consumption.

My conclusion is that the growth figure paints too negative a picture of what was going on in the first quarter. This does not alter that a growth slowdown is imminent, quickly leading to contraction.

The tension in the labour market is unprecedented. The number of job openings per 100 unemployed rose from 106 in the fourth quarter last year to 133 in the first quarter (190 in the US, by the way). It is said that companies post vacancies that they ultimately do not want to fill. They would do that to get or maintain a sense of the labour market.

Tension in the labor market | Vacancies per 100 unemployed 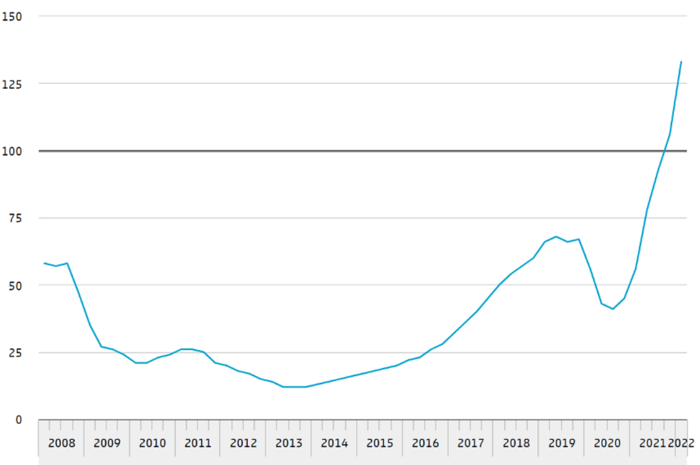 Shortages as the main barrier to retail business operations | % Businesses 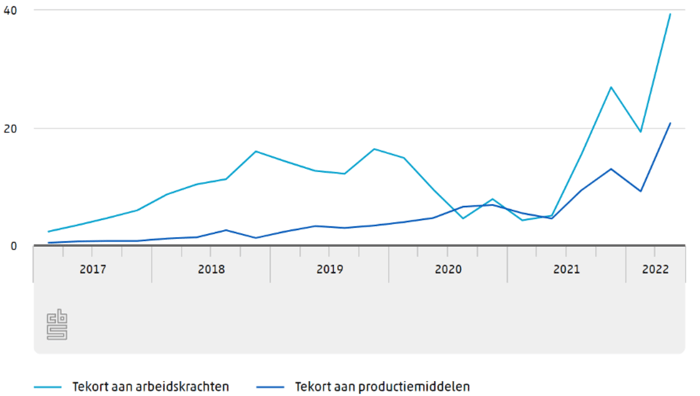 I see this tight labour market in our country and elsewhere, especially in the US, as a beautiful aftershock of the pandemic. It also has consequences for the supply of labour. The labour participation rate, i.e., the proportion of the population entering the labour market, has risen to record levels in our country (figures go back to 2003). That is not the case in the US.

Equity markets continue to be under pressure. So far, the main culprit has probably been rising interest rates, which are putting pressure on valuation levels. Interest rates will continue to rise, but much of the needed rise has perhaps already been factored into share prices. The exciting thing for equity investors is whether the economy will enter a recession. If that happens, corporate profits will also take a hit. Such a "double whammy" of lower corporate earnings to which lower valuations are unleashed would be painful. I think the chances of the US avoiding a recession are very reasonable. It's harder for Europe, but stock markets are influenced more by what happens in the US than what happens here.

The global economy is currently experiencing unprecedented aftershocks from the pandemic. It, therefore, regularly appears that various indicators are inconsistent. Consumer confidence is shallow everywhere, but this is not reflected in a weakening of consumer spending; on the contrary.

Many countries are experiencing unprecedented labour shortages. The figures may exaggerate the current shortage, but this is a huge challenge for entrepreneurs.

Amid all the turbulence, stock markets are under pressure. The situation is uncertain. Most of the expected interest rate hike has probably been incorporated into share prices. A possible recession will pressure corporate earnings and lead to further price losses. I estimate the chance that we will end up in a recession in Europe at more than 50%, while I estimate the opportunity for the US at less than 50%. 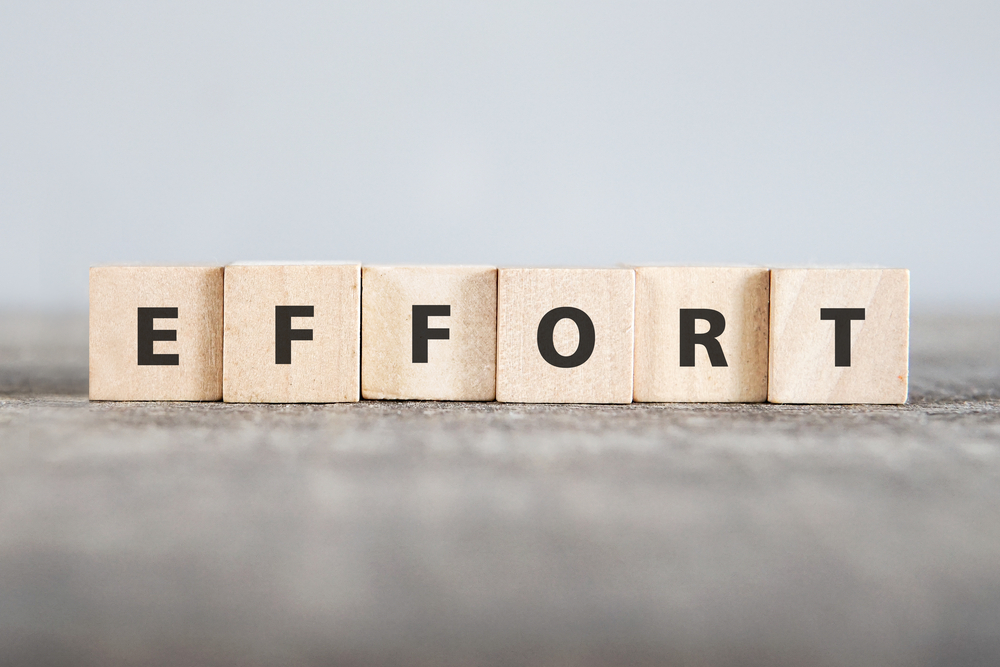