Google Translated from Dutch to English. Here is the link to the original article in Dutch. The article was originally published on 25 March 2022.

Last week I wrote about the most substantial drop ever recorded (figures from 1991) in the ZEW index for Germany. It measures the expectations of analysts and economists. The problem with such surveys is that people who fill out the questionnaires sometimes let their emotions guide them on questions that require judgment. Moreover, analysts and economists are "on the sidelines" of the economy, and they are only spectators and do not stand with their paws in the clay.

People who complete the monthly IHS Markit Purchasing Managers' Index survey have their feet in the clay. The preliminary results of the March version were published yesterday, and those numbers were excellent. In the eurozone, business confidence decreased only slightly in March: manufacturing went from 58.2 to 57.0; for the service sector, it went from 55.5 to 54.8. When you consider that anything above 50 implies growth, these are outstanding results.

When I read the accompanying press release, I became less enthusiastic. Export orders declined for the first time in 21 months in March, while price increases hit a new all-time high (figures go back to 1998). It likely means that consumer-level inflation will not fall for the foreseeable future. Companies also say delivery times, which have become somewhat shorter in recent months, have become longer. The supply chains, which the pandemic has severely disrupted, have thus been given a new blow by the war. Recent lockdowns have been introduced here and there in China may also play a role in this. That entrepreneur are certainly not yet in a panic is shown by the fact that employment continues to grow. 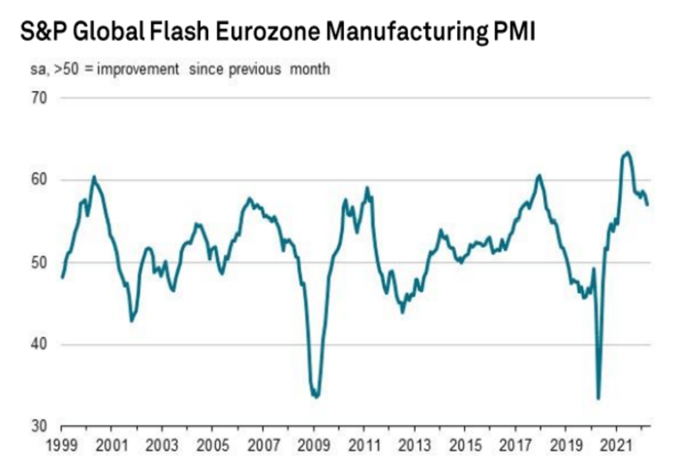 The German Ifo index's picture is more gloomy than IHS Markit's figures. On the website of the Ifo Institute it is called: “Krieg in der Ukraine lässt ifo Geschäftsklimaindex abstürzen”. This measure of business confidence in Germany fell from 98.5 in February to 90.8 in March, which is significant. The expectation component, usually the most valued, experienced the most effective monthly decline ever (my numbers go back to 2005). Entrepreneurs are also more pessimistic about the current situation, but the decrease in this sub-index in March is minimal: from 98.6 in February to 97.0. Entrepreneurs also indicate that the outlook is highly uncertain. 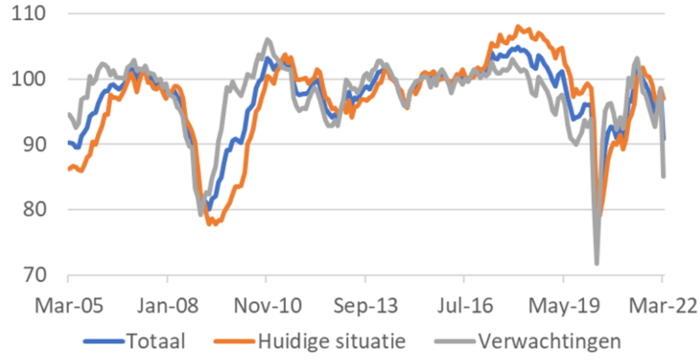 The war is quite far away for the US

According to figures from IHS Markit, business confidence in the US rose in March, and it was already strong. The differences with the EU are, of course, also significant. The war is much further away for the Americans; American gas prices are much lower and have risen much less than ours, the US is on balance energy self-sufficient and therefore suffers no loss in terms of trade due to higher energy prices, and the American economy is considerably less open than ours and therefore suffer less from shocks in world trade. 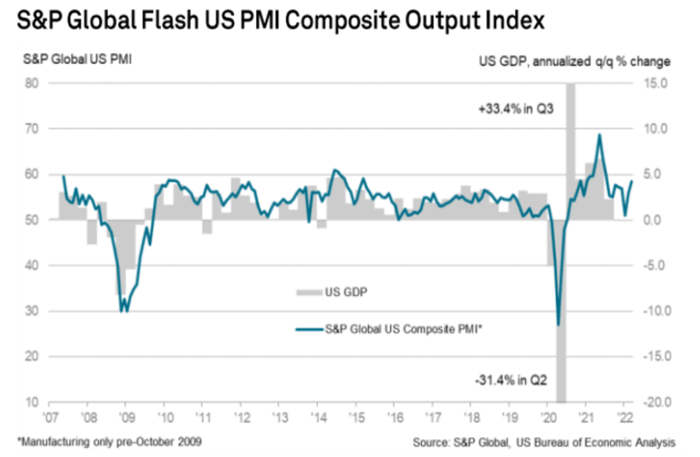 American companies also continue to invest more and more. The labour market is extremely tight, and companies may be trying to solve that problem by investing more in labour-saving technology. The following picture shows the dollar value of the capital goods shipped each month (excluding defence and aircraft). These figures indicate the development of the business investment. This time I show the whole series going back to the end of 1991. I find it very remarkable that between 2000 and 2020, the movement is mainly sideways with a small amount of increase on balance, but since the pandemic, there has been substantial growth. It is conceivable that capital goods prices are rising more strongly than in the past and that this chart overestimates the volume of an actual investment. However, substantial investment growth is confirmed in the national accounts.

US: Shipment of capital goods (USD bn per month, excluding defence and aircraft)

Powell puts on his seven-mile boots

Fed Chairman Powell said in a speech this week that there is a good chance that the Fed will raise interest rates in 50 basis point increments in the coming months. That was, of course, thick. US inflation has gotten pretty out of hand, and the Fed has let it happen. They are now far "behind the curve," economists say, and need to catch up. I wouldn't lose sleep over it. A more important question than how big the rate hikes will be is how far the Fed will go.

The Central Economic Plan that the CPB recently published (on 9 March) assumed a government deficit of 4.4% GDP in 2021, after a 4.2% deficit in 2020. quarterly and therefore also for the whole of 2021. The debt now appears to be only 2.5% of GDP. I thought it might have to do with differences in definitions, but according to Statistics Netherlands, there is no difference.

This means that government finances were in much better shape at the end of last year than previously thought. Rutte-4 will therefore start from a much stronger financial position. We'll see whether that will lead to (even) more generosity.

Dutch consumer confidence had fallen for five months in a row up to and including March. This was undoubtedly related to the high and persistent inflation. After the outbreak of the war in Europe, this confidence index continued to fall again. According to this measure, confidence is now weaker than after the pandemic outbreak but still fractionally higher than in two months of 2013 at the time of the euro crisis.

The average balance of the sub-questions 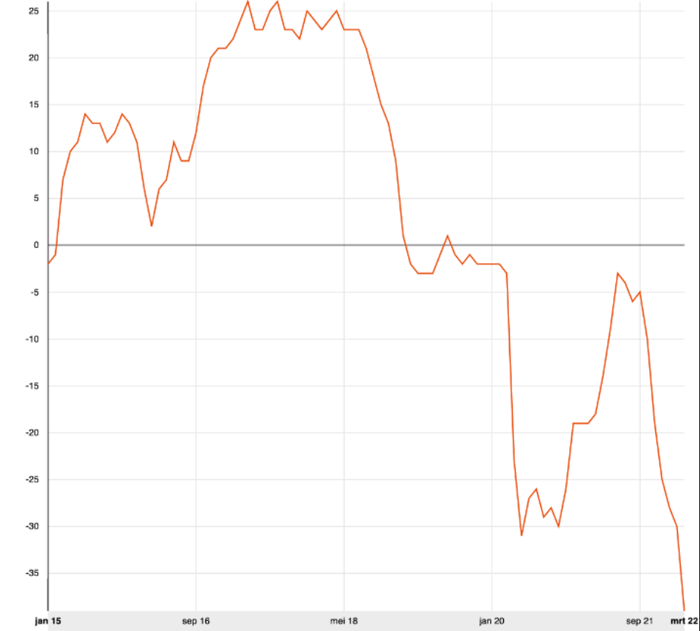 The economic outlook is highly uncertain. This was already the case before the war because it was completely unclear how quickly supply chain disruptions would diminish, whether transport costs would fall from the extremely high levels that seem to have become normal after the pandemic outbreak, and how energy prices would continue to develop. Now there are the uncertainties caused by the war.

A few weeks ago, I wrote that the chances of a recession are probably higher than 50% if the war continues. Opinions are strongly divided. I see that my former colleagues at ABN AMRO think otherwise and consider the risk of a recession to be small. Their reasoning does not change my mind. They believe that consumers will spend the money saved during the pandemic, so the economy will continue growing. It could be, but consumer confidence doesn't indicate it at all.

For me, there are two crucial considerations. Firstly, the high inflation, which will remain high for the time being due to the increased energy prices, is eroding purchasing power so much that I cannot imagine that consumer spending will grow strongly in volume.

There are also logistical disruptions. They are difficult to measure. But anecdotal evidence suggests those disruptions are increasing again for the time being. That should almost lead to shrinking production. If I read the IHS Markit and Ifo reports correctly, this is already the case in the automotive sector.

The most spectacular figures of the week are those from Statistics Netherlands on public finances in our country. The government deficit fell unexpectedly last year and turned out to be much lower than previously thought. For example, the 'money issuers' of Rutte-4 suddenly have a lot of room to spend even more. Not that that is positive in advance, of course… 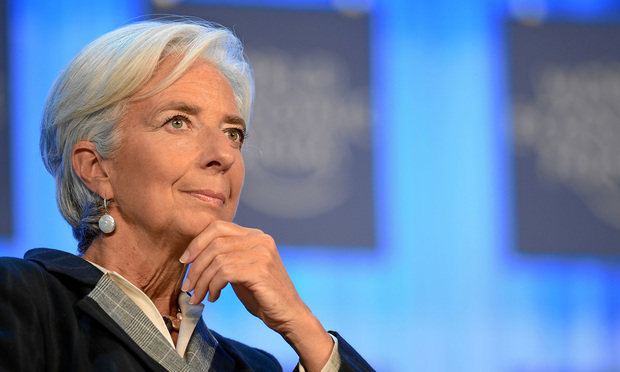 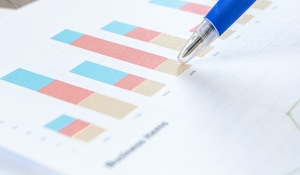