Google Translated from Dutch to English. Here is the link to the original article in Dutch. The article was originally published on 07 January 2022.

Dutch consumers and producers in the industry are currently very much in disagreement. While the mood among these entrepreneurs is remarkably elated, consumers are left looking dejected. It is indicative of the current economic situation. The coronavirus is sweeping us in waves and variants, prompting tightening and then reversing restrictions on public life. But the economic consequences differ greatly from sector to sector. The depressed feeling of consumers in recent months is undoubtedly related to the increased number of corona infections and the lockdown measures. The rise in inflation will also have no effect on consumer confidence. It is mainly entrepreneurs in the services sector that suffer the most, while the industrial sector has actually recovered strongly. Of course there are delivery problems and rising costs, but industrial production in our country is increasing rapidly and order books are well filled. 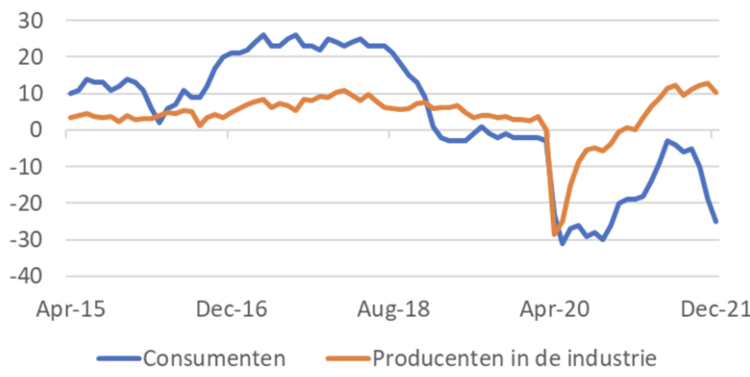 Dutch inflation further up in December

According to preliminary figures, inflation rose further in December. The inflation measure according to the European HICP calculation method was 6.4% last month, compared to 5.9% in November. Statistics Netherlands will only publish detailed figures next week, including the national benchmark, which was 5.2% in November. The increased energy prices will undoubtedly have been the biggest culprit. The gas price in Europe in particular is extremely high and volatile. Before the pandemic, the gas price was slightly below EURO 20 per MWH. By mid-2021 this had risen to approximately EUR 35. After that it went fast: approximately EUR 90 at the end of September. In November, the price fluctuated between EUR 65 and EUR 95. Then the price flew to EUR 180 just before Christmas to end the year at EUR 70. Gas now costs EUR 95 again. As the government has reduced the energy tax with effect from this year , inflation will be pushed from the January figure. Well, that's how I can do it… and don't forget that rents (with a total weight of about 23% in the inflation basket) have also been restricted. Our market economy is slowly moving towards direct price controls…

Inflation in the eurozone rose to 5.0% in December, from 4.9% in November. Of course, energy was the main culprit. Energy prices were 26.0% higher than a year earlier (November 27.5%). As energy has a weight of 9.5% in the inflation basket, this component was responsible for almost half of total inflation.

Excluding food, energy, alcohol and tobacco, so what we call core inflation, the price increase was 2.6%, the same as in November. The story that inflation is almost entirely driven by energy therefore does not hold. The following chart shows that inflation in services and industrial goods (excluding energy) has also risen sharply in recent months. Duly noted. 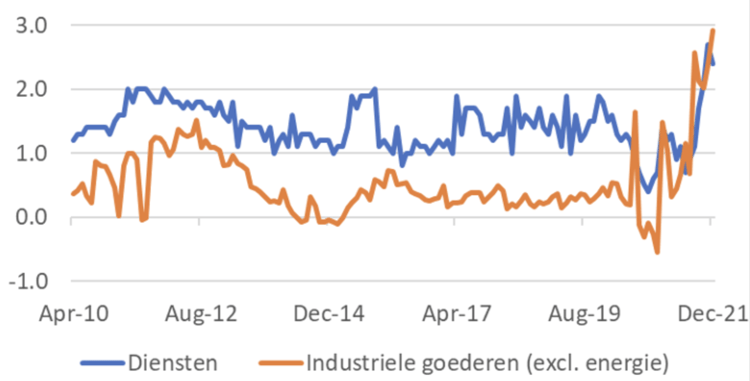 The end of the pandemic?

Are we going to put the pandemic behind us this year? And how will the economy develop then? Those are the big questions at the start of the year. We have already counted ourselves rich with regard to the pandemic, only to be disappointed afterwards. So we have to be careful. However, the experiences in various countries with the omikron variant suggest that this variant is more contagious than previous ones, but has milder effects on health. Then there is much to be said for lifting the strictest restrictions on public life. Apparently some countries have already made that choice. For example, the number of infections related to the population size in Denmark is currently very high, but the restrictions on public life are limited.

When life becomes freer, in my view the economy has a considerable recovery power. Because a large part of the economic damage caused by the pandemic has ended up on public finances, the damage in the rest of the economy is relatively modest. However, it is very unevenly distributed. A group of entrepreneurs in the retail and hospitality sectors have been hit very hard and deserve further support from the government. But the financial position of the vast majority of families has improved rather than deteriorated. Despite higher inflation and the decline in purchasing power from current incomes, consumers do have considerable spending power. In addition, corporate profits have developed favorably as a whole, which means that companies can also focus on growth. If the logistical disruptions also diminish, there is little in the way of a continuation of strong economic growth.

For this year, in addition to unfavorable developments regarding Covid, I see a very big challenge and a related risk. First the challenge. In many countries, especially in the Netherlands, the labour market is tight. That was already the case with us before the pandemic. There are a few possible consequences. First, staff shortages can put a brake on production. In the battle for staff, wage increases will accelerate. It is also conceivable that companies will be able to boost productivity by investing in labour-saving technology. Since the pandemic has shown that working from home is possible for many more activities than we did before the pandemic, it is only natural that companies in countries with tight labour markets will recruit 'home workers' in other countries. In this way the national labour market tightness can be overcome. Incidentally, this will change the competitive environment in the labour market, undoubtedly to the detriment of employees.

The following picture outlines the situation for the US. The orange line is based on figures from the so-called JOLTs report and shows the number of vacancies per 100 unemployed. In the Netherlands, the number of vacancies currently exceeds the number of registered unemployed. For the third quarter of 2021, Statistics Netherlands reported 126 vacancies per 100 unemployed. But in the US, it was even 154 in November. The blue line comes from the National Federation of Independent Business survey and represents the percentage of companies that say they plan to pay salaries soon. to increase. It is clear that plans to raise salaries depend heavily on the tension in the labour market. 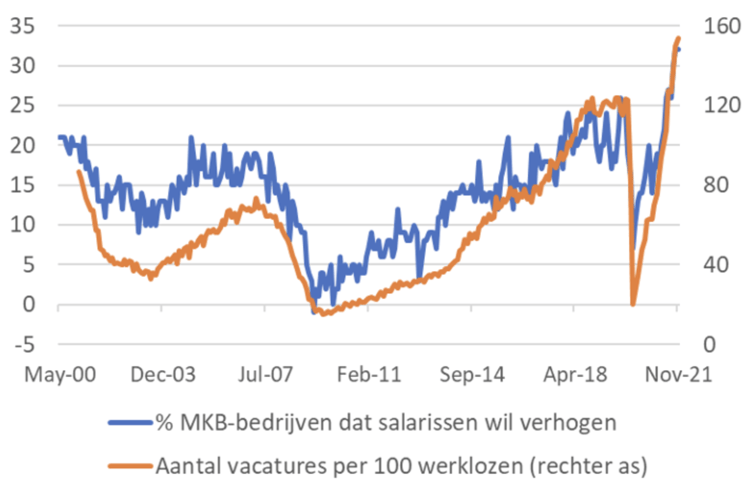 If the salary increases are realised, there is a danger that the inflation caused by energy prices and logistical disruptions will become more permanent.

The Federal Reserve has long maintained that higher inflation would be temporary and that tighter monetary policy was not necessary or justified. Between September and December, there has been quite a shift in the Fed's thinking. While the majority of the policy committee members in September believed that rate hikes would not take place in 2022 (a minority considered one or two rate hikes likely), in December a majority believed that 2022 would lead to three rate hikes. In addition, the pace at which bond purchases are reduced has been accelerated. The minutes of that meeting in mid-December, published this week, also contain two surprises. For example, the first rate hike may come earlier than previously expected. In addition, the Fed is not only considering stopping bond purchases that will stop the central bank's balance sheet from growing, the Fed may also begin to shorten its balance sheet sooner than expected. It does this by not reinvesting the money that comes in from the redemption of bonds in bonds. The stock market was quite shocked by these minutes. And that, in my view, is the biggest risk for 2022. If inflation continues to be higher and more persistent than currently forecast and the Fed has to raise interest rates much more strongly than currently expected, or capital market rates rise because market participants believe that the Fed is too late and inflation expectations rise, which threatens financial instability. An unexpectedly sharp rise in US interest rates could send a shock wave through other financial markets. For now, in my view, that is nothing more than a risk.

The inflation genie isn't out of the bottle yet

The most important question is whether the Fed is already too late. The experience of the 1970s and 1980s suggests that it causes a lot of economic damage when the inflation genie has escaped from the bottle and the central bank tries to force that genie back into the bottle. Some will argue that that inflationary genie is long out of the bottle. Indeed, headline inflation in the US stood at nearly 7% in November, while the Fed's preferred measure excluding food and energy stood at 4.7%. I would say, however, that the evolution of inflation expectations determines whether or not the inflationary spirit has already escaped the bottle.

There are several measures of inflation expectations. They all paint a similar picture: inflation expectations first fell after the outbreak of the pandemic, but rose again from mid-2020. The level now reached is by no means alarming, as the following chart, which is based on calculations by the Cleveland Fed, makes clear. I would therefore conclude that the inflationary genie has not yet escaped from the bottle. However, the Fed would certainly be wise to start tightening monetary policy before inflation expectations rise much further. Ending bond purchases in March and a first rate hike in the same month therefore seem to me to be sensible measures. 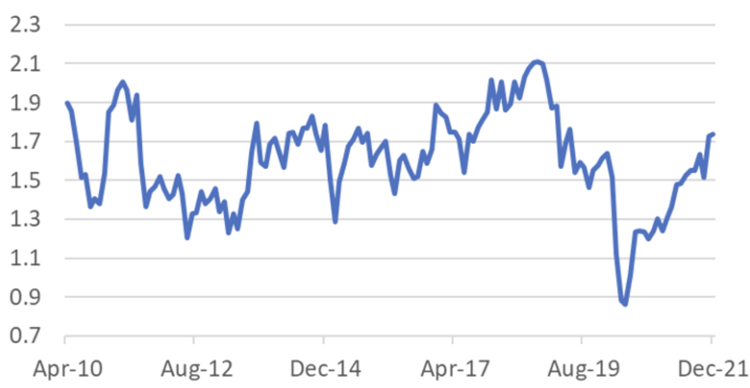 Perhaps I am naive and hard-learned, but I am hopeful that we will put the pandemic behind us during the course of this year. The economic prospects are then favourable. Staff shortages will pose a significant challenge, although they already were before the pandemic in the Netherlands.

Inflation will continue to rise for the time being. There really is more to the eurozone than just energy. The main risk to the economic outlook is that inflation will remain more persistent and higher than anticipated. If such a development results in an unexpectedly strong (mainly US) rise in interest rates, this could subsequently lead to significant financial instability. Although I think that central banks underestimate inflation, a scenario of financial instability remains no more than a risk for me too. 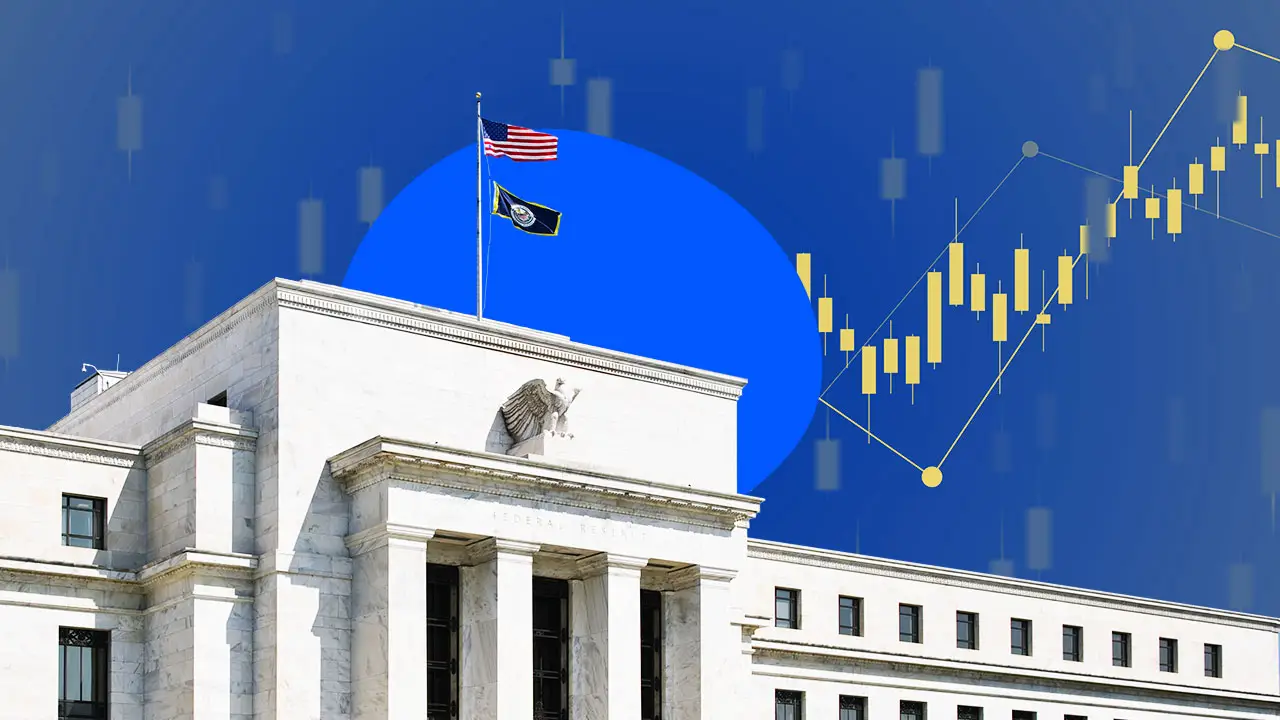 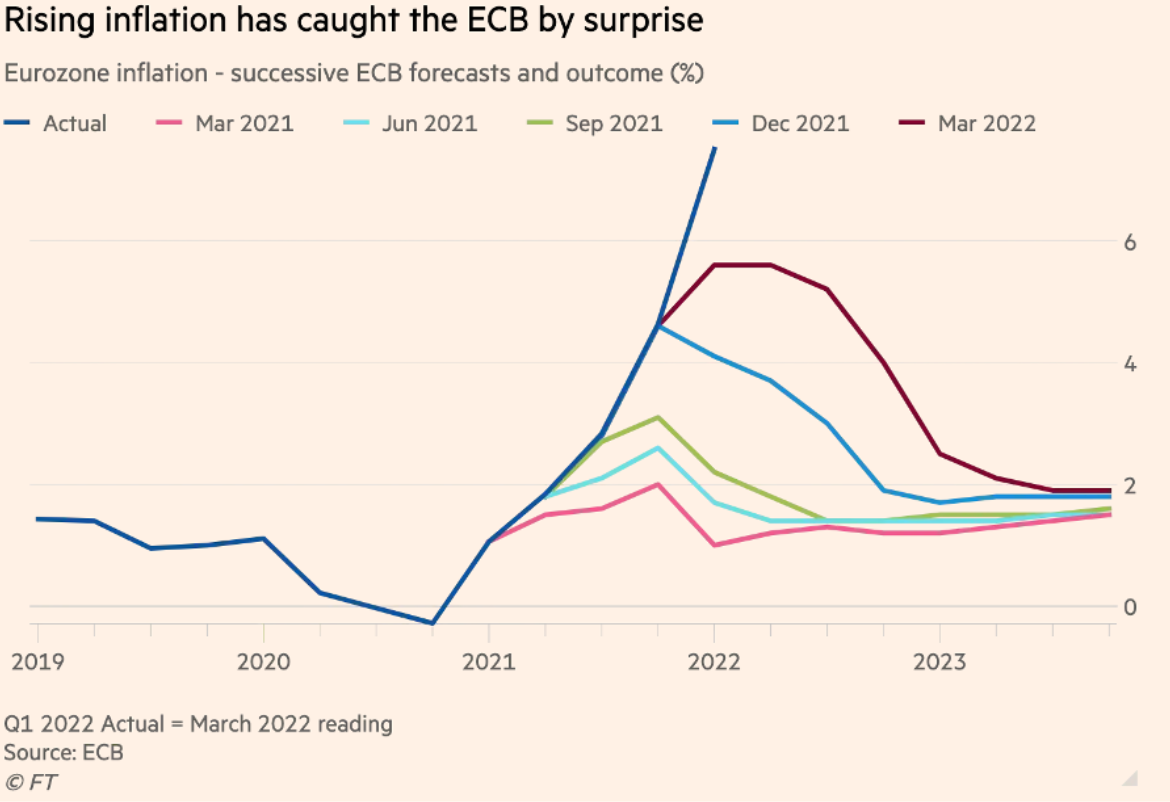