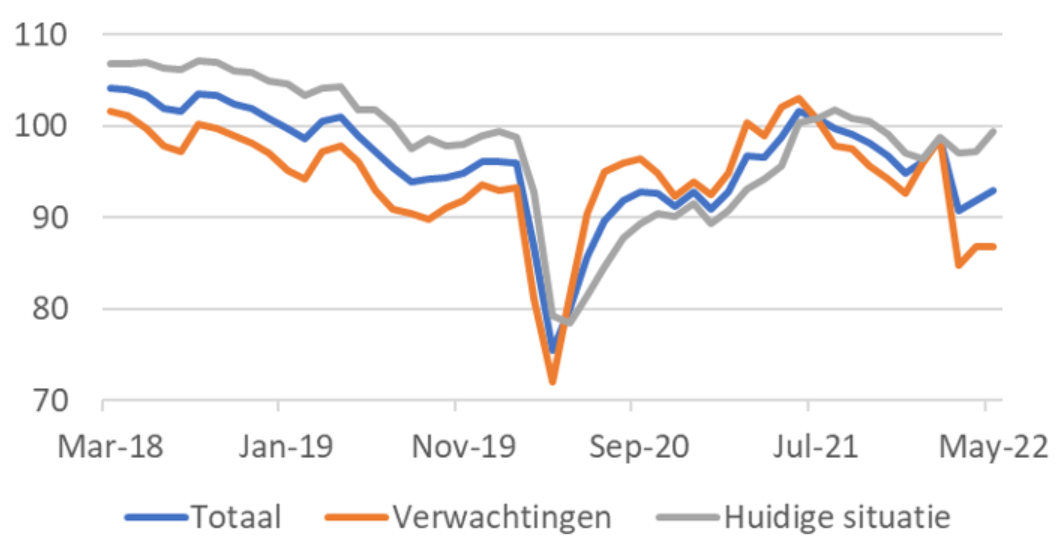 BEFORE I FORGET: I'M TAKING A BREAK IN JUNE AS TO MY WRITING WORK. I HOPE TO WRITE THE NEXT WEEKLY MACRO COMMENTS IN JULY.

I am not a big fan of ECB President Christine Lagarde. But now she has written a blog (at least her name is on it) that I really like. If you want to read the text yourself, it can be found here: Monetary policy normalisation in the euro area (europa.eu).

I like to summarise the main points. The economy is reopening, but we are not returning to the same pre-pandemic situation. Lagarde lists three types of shocks that strongly affect or have affected the economy. The first type concerns shock due to logistical disruptions that have led to increases in the price of raw materials, materials, other industrial inputs, and food. The second kind of shock concerns what has happened to the aggregate demand for goods and services in the economy and production say supply and demand. These shocks have led to high price increases in industrial goods. The third set of shocks concerns the opening up of the economy, leading to a significant shift in consumption patterns, with fewer goods and more services. Due to staff shortages, this leads to high inflation in services.

According to Lagarde, less than 20% of all components of the eurozone inflation basket rose faster than 2% a year before the pandemic. Now it is 75%.

She then notes that supply chains may change for geopolitical reasons. This makes the global economy less efficient and leads to structurally higher inflation, at least for some time. The war-accelerated “green transition” will have the same effect.

Lagarde concludes that the highly accommodative pre-pandemic monetary policy is no longer appropriate. After all, that policy aimed to boost inflation and inflation expectations that were judged to be too low. That is no longer necessary. That is why Lagarde is informally announcing a normalisation of the policy. The ECB will stop buying bonds in July, and interest rates will undoubtedly rise. At the end of the third quarter, we will be rid of negative interest rates. Hallelujah! The ECB should have come to this realisation sooner, but Hallelujah!

The ECB would not be the ECB if Lagarde also didn't temper expectations for interest rate hikes. “Gradualism, Optionality, and Flexibility” remain keywords. So don't count on a high interest on the savings account.

Various shocks are still tossing up and down the world economy, and predictability is limited. The war and sanctions that will affect the European economy remain challenging to estimate. I am not at all confident that we can avoid a recession. You can argue that a recession is not so bad because we have an overstrained labor market, and a (limited) rise in unemployment might be a good thing. But yes, it's still annoying when people lose their jobs or see their company get into trouble.

The latest confidence indicators do not suggest a recession in the eurozone in the short term. The preliminary figures of the so-called purchasing managers indices show a slight decline for both the manufacturing and services sectors. The combined figure fell from 55.8 in April to 54.8 in May. That's a pretty healthy absolute level. The influential German Ifo index even rose: to 93.0 in May, after 91.9 in April. The graph shows that the outbreak of the war led to a significant weakening of the expectation component but that this has not yet translated into a comparable decline in the assessment of the current situation. In fact, according to the Ifo survey, German entrepreneurs rate the actual economic development in May more positively than they did in April: 99.5 to 97.3. 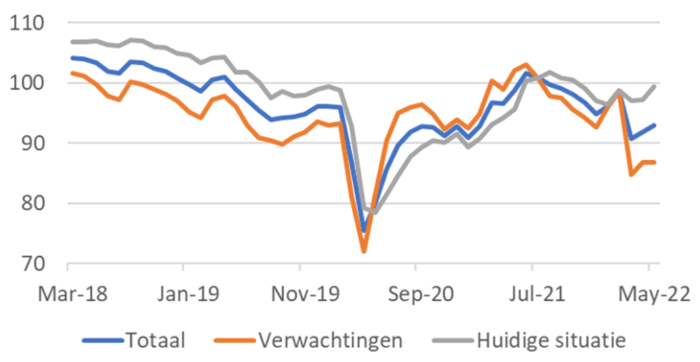 The combined purchasing managers index fell from 56.0 in April to 53.8 in May in the US. Economic growth was slightly downwards in the first quarter: -1.5% (annualised) against the previously reported -1.3%. The Federal Reserve of Atlanta is putting together a series, GDPNow, to quantify current growth based on various indicators. This GDPNow is now at +1.8% for the second quarter. So that doesn't exactly stop.

The question this raises is whether the American economy might end up in a recession after all. The combination of purchasing power eroding inflation, the sharp rise in interest rates, and the increased uncertainty due to the war may work in that direction. On the other hand, the yield differential between 10-year and 2-year government bonds has been 0.2-0.4% for some time now. In the past, recessions have all been preceded by an inversion of the yield curve, specifically by a situation where the effective yield on a 2-year paper has been higher than that of a 10-year paper.

A factor that is remarkably often forgotten in these considerations is what happens to public finances. Well, it's nothing short of spectacular what's happening there, as is immediately apparent from the following chart. The federal government's budget deficit is currently shrinking at an unprecedented rate. Of course, this has everything to do with the fact that the support and stimulus measures of the last two years are not being repeated and with the strong labor market. Between March 2021 and April 2022 (i.e., 13 months), the deficit decreased from 18.6% of GDP to 5.0% of GDP. This will inevitably put a powerful brake on GDP growth. The good news is that this fiscal tightening will not continue at the same pace. I, therefore, remain reasonably optimistic for the US that a recession can be avoided there, or at least that they have a better chance of it than we do in the eurozone.

Double whammy in the stock market?

This is, of course, very relevant for the stock market. It has been hammered this year. So far, the decline in share prices has mainly been driven by rising interest rates, which have hurt price-earnings ratios. A recession would also hit corporate profits. A 'second whammy' in the stock market would then make sense.

Profit margins are currently high. A macroeconomist like me prefers to look at macro figures found in the national accounts. In the first quarter, corporate profits declined slightly in dollars and as a percentage of GDP. There is no need to panic, but the following chart clarifies that profit margins are historically high. Anyone who believes in 'mean reversion' can easily conclude that there is at least more 'downside' than 'upside.' 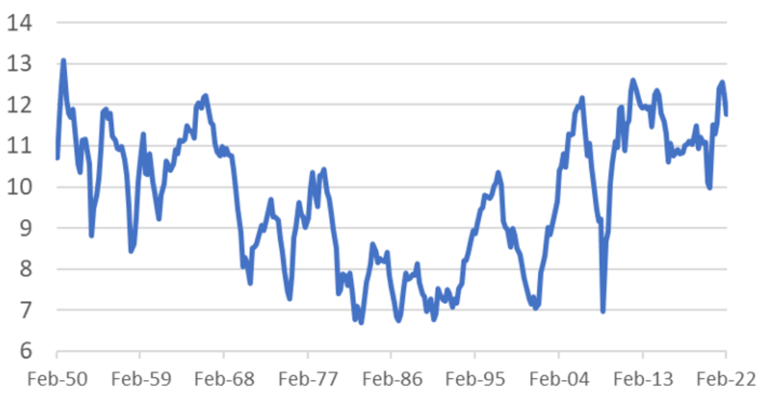 Turkish inflation spirals out of control

Something completely different. Turkey's President Erdogan is not happy with Sweden and Finland as potential NATO countries. The Turkish citizens, I imagine, are much less happy with the monetary policy advocated by Erdogan. Erdogan has an unconventional view of inflation. While most economists think high inflation can be combated with interest rate hikes, Erdogan believes the opposite. Interest is a cost item for companies. The lower the interest rate, the lower those costs and the lower inflation. In addition, low-interest rates encourage investments that increase production capacity, reducing inflationary pressures.

Erdogan's vision is currently being tested. In 2021, the central bank cut interest rates while inflation rose. Unfortunately, this crazy experiment is getting completely out of hand for the Turkish people. In April, inflation was 70%. Despite this, the central bank maintained its key official rate at 14% this week. The lira is under intense pressure and has roughly halved in value over a year. Add to that the increased energy prices, and there is a good explanation for the increase in inflation. The central bank buys liras for dollars on the foreign exchange market to turn the tide. Over the past two weeks, foreign exchange reserves have declined by approximately USD 6 billion (to about USD 60 billion). 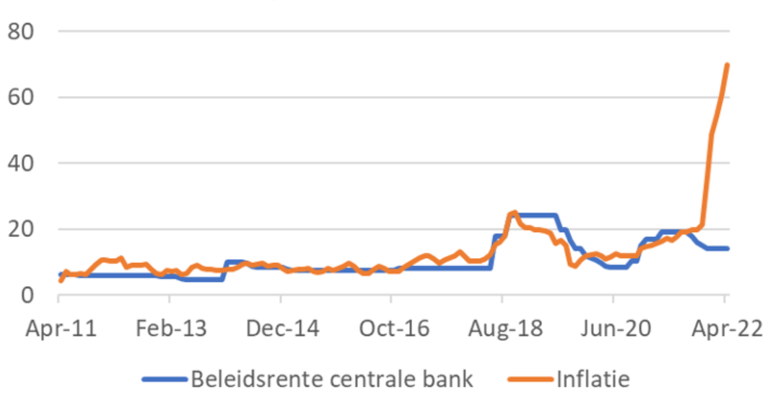 The question is how this affects Erdogan's position. Citizens are quite willing to suffer some economic pain, but they revolt if it gets too bad. In South America, political leaders who let inflation spiral out of control have often been forced to resign under pressure.

I'm taking a break for a few weeks from my written comments (and my spoken comments at BNR). And I'm glad I can do that with some positive messages.

The first is that ECB President Lagarde has posted a blog post that is well worth reading, although my summary may also suffice. The inflation outlook is very different from before the pandemic. While much is uncertain, the current circumstances and outlook no longer justify monetary policy boosting inflation and inflation expectations. We'll be rid of that damned negative interest rate in a few months.

Various confidence indicators are optimistic that the blow to the economy due to the war, sanctions, etc., may be (slightly) less negative than previously feared.

The US economy is currently producing mediocre GDP growth figures, but an extremely spectacular reduction in the government deficit is playing an important role. Public finances will not continue to influence the economy for much longer negatively. I think there is a good chance that the US will be able to avoid a recession.

Finally, it is worth looking at Turkey. Inflation there is entirely derailed by the monetary policy enforced by Erdogan. Of course, that doesn't fit in with good news. Turkish citizens are severely affected by this. That could significantly weaken Erdogan's position. Whether that's good or bad news is up to you.

See you in July!