Google Translated from Dutch to English. Here is the link to the original article in Dutch. The article was originally published on 1 April 2022.

According to the European inflation measure, the Harmonized Index of Consumer Prices (HICP), Dutch inflation rose to 11.9% in March from 7.3% in February. In March, prices rose by no less than 4.7% compared to February. Those are shocking numbers. Two days earlier, German inflation had increased from 5.5% in February to 7.6% in March, and Spanish inflation rose from 7.6% to 9.8%. We could therefore already count on a significant increase, but this…..

In the eurozone, inflation rose from 5.9% in February to 7.5% in March. Lithuania leads the way with 15.6%, and the Netherlands takes the bronze. Malta has the lowest inflation rate: 4.6%, and in France, inflation is meagre: 5.1%. If you only look at March compared to February, the Netherlands takes the lead with an increase of 4.7%, followed at a respectable distance by Spain with 3.9%. I think it's because governments in other countries have intervened more quickly and decisively in energy pricing. Not that I think that's a great idea, but the differences are spectacular. According to the HICP, energy was 102.9% more expensive in March than a year earlier. In February, this was 'only' 51.7%. For the eurozone, these figures are 44.7% for March and 32.0% for February, respectively. That saves a sip on a litre of petrol. Incidentally, inflation is accelerating across a broad front. Food prices, for example, were 5.5% higher in March than a year earlier (4.6% in February). 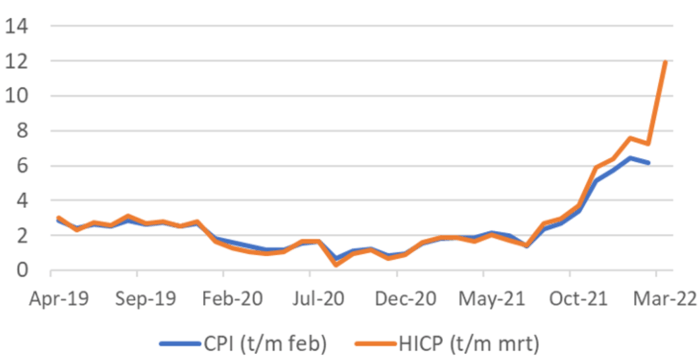 CPI ( until February) | HICP (until March)

Next Thursday, CBS will publish the figures according to its national benchmark, the Consumer Price Index (CPI). It has been slightly below the HICP for several months now. The main difference between the two indices is that rents imputed to homeowners are part of the CPI and not the HICP. Due to the government's tight restraint on rent increases last year, this is currently limiting the rise in the CPI (utterly contrary to what you might intuitively expect, but that's what you get when governments intervene in price formation).

A figure of 10.8% in March would bring the average for the first three months to 7.8%. In the CPB's base scenario, inflation will be 5.2% this year, and that scenario can go in the trash. According to an alternative scenario of the CPB, which assumes a long-term negative impact of the war, inflation will average 7.9% this year. That probably looks more like it. Finally, DNB's economists have recently raised their inflation estimate for 2022 to 6.7%. The ink of that revision is barely dry, but it now seems obsolete.

As of April 1, excise duties on petrol etc. have been reduced. Then the inflation rate could drop a bit, but for now, inflation will remain very high unless the war ends soon, energy prices fall sharply, and the logistical disturbances in the world are quickly resolved. There is little indication that such a dream scenario will unfold soon.

The staggeringly high and staggeringly rapid inflation is eroding purchasing power unprecedentedly. If consumers are not prepared to use their savings, this will lead to a sharp fall in consumer spending. Fortunately, many households have saved more than usual during the corona pandemic. So there is a buffer, but it depends on the families whether they will use that buffer. Some households have no meat on their bones at all. Inevitably, they will then need extra support.

For a year and a half, the global economy has been plagued by logistical disruptions, hampering production and increasing inflation. Nearly 30% of all goods manufactured in the world come from China. It is therefore essential to closely monitor what is happening in China to gain a perspective on these logistical disruptions. There, lockdowns remain the order of the day with clear consequences for economic activity.

After October last year, it looked as though the logistical disruptions had eased somewhat. In surveys, producers reported that delivery times were getting shorter. I'm afraid that improvement is roughly nipped in the bud by the war in Europe and the Chinese lockdowns. That's terrible news for the short-term inflation outlook. 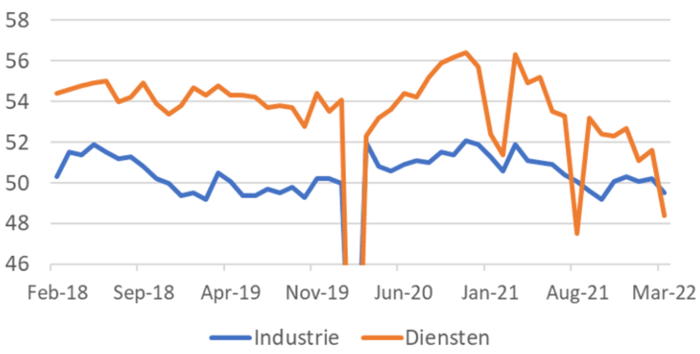 Confidence indices are (besides inflation figures) the first economic data now available for the period after the outbreak of the war in Europe. Last week I reported on the dip in consumer confidence in our country in March. Producer confidence followed this week, which turned out not to have decreased but to have improved a fraction. The following chart nicely illustrates the divergence between consumer and producer confidence. 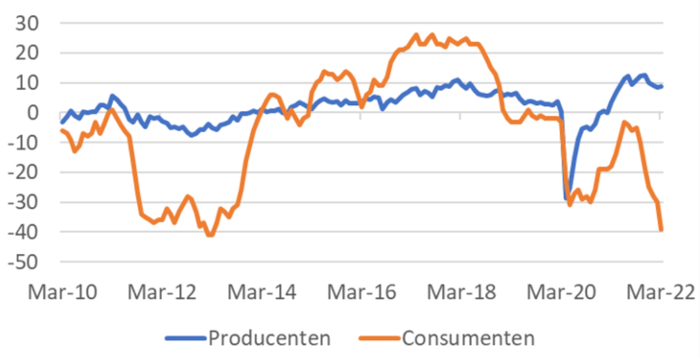 Dutch entrepreneurs are not only more optimistic than consumers, but they are also a lot more positive than their competitors elsewhere. In Germany, there is a depressed mood among entrepreneurs. The difference between the Netherlands and Germany undoubtedly has to do with the great importance of the automobile industry in Germany. That sector has been struggling with chip shortages for some time and appears to be receiving another blow because they source a lot of wiring from Ukraine. Those supplies are, of course, currently on hold. 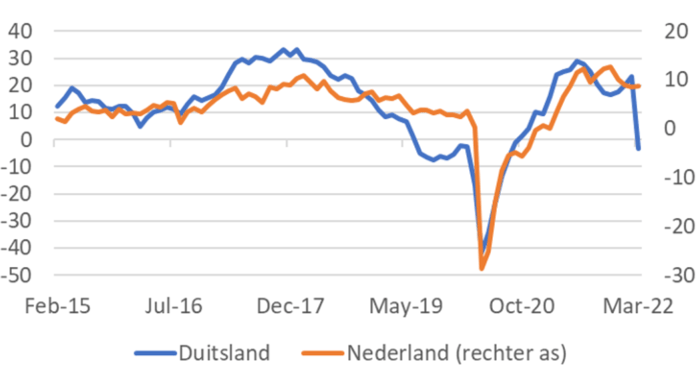 US: vacancies per 100 unemployed 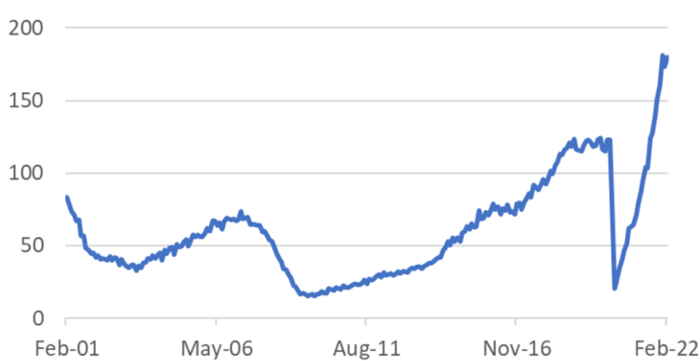 The following chart shows wage growth in the US and ours. Now, these series are probably not comparable. But at least the movement is similar. ECB President Lagarde constantly claims that the economic situation in the eurozone is so different from the US that it is justified that the ECB does not or hardly tighten monetary policy for the time being. At the same time, the Fed has already raised interest rates in the US and to raise interest rates further in the coming months. The Dutch economy may then resemble that in the US more than in the rest of the eurozone. US monetary policy would therefore be much more appropriate for our economy than ECB policy. Strictly speaking, the monetary policy of the ECB that is too loose for our economy should be compensated through fiscal policy. The probability of that happening is zero. 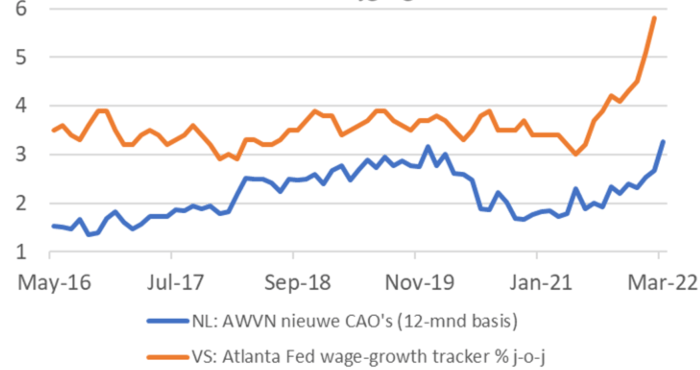 This week's big story is the sharp rise in inflation in our country, more vital than elsewhere and to an unprecedented high level. The tax cut on April 1 and the VAT cut on energy on July 1 may pressure inflation figures, but the pace of price increases remains phenomenal, eroding purchasing power. Families can only absorb inflation in their spending by eating into savings, which remains to be seen.

Apart from interventions in excise duties and VAT, inflation will remain high for the foreseeable future if energy prices do not fall quickly. The lockdowns in China threaten to exacerbate logistical disruptions worldwide, which are also responsible for soaring inflation, negating the slight improvement seen in recent months. As a result, inflation may get another push-up…

With optimistic entrepreneurs, very high inflation and a very tight labour market, the Dutch economy currently resembles the American economy more than the economy in the rest of the eurozone. The Fed's monetary policy would therefore be more appropriate for us than the ECB's policy. Strictly speaking, the monetary policy that is much too loose for us should be compensated by a restrictive fiscal policy. By pointing this out, I am a voice crying in the wilderness.