Google Translated from Dutch to English. Here is the link to the original article in Dutch. The article was originally published on 8 April 2022.

“Energy” (i.e. gas and electricity) is obviously the major, but by no means the only culprit. The costs of energy in March were 157.4% higher than a year earlier, in February it was still a 'tame' 77.0%. Of course, the prices of fuels also rise sharply: 36.5% in March against 24.0% in February.

If you look at core inflation on the CPI measure, ie the measure that excludes food, energy, alcohol, and tobacco, the price increase was only 2.6%. And if only energy is excluded (in this case energy includes gas and electricity as well as fuels), inflation on the HICP measure was 3.6% in March. 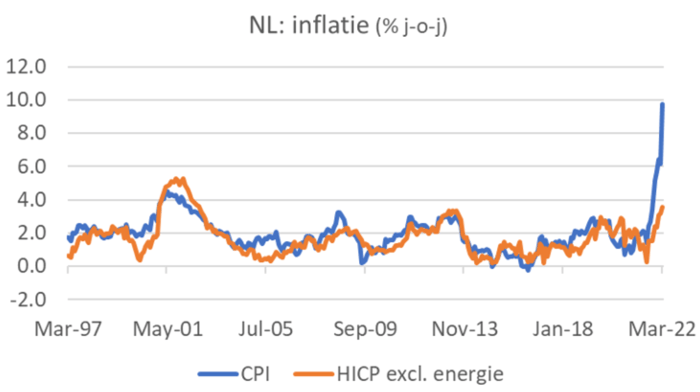 In his column in the FD, Lukas Daalder wrote this week that the inflation figures somewhat overestimated the actual loss of purchasing power of families, a point that my former colleagues at ABN AMRO had also made. When calculating the prices of gas and electricity, Statistics Netherlands assumes new contracts. But many people have contracts in which they fix prices for a longer period of time. I calculated on a beermat that inflation would have been about 4 percentage points lower in March if this had been taken into account and if we assumed that half of the people still have a permanent contract. If energy prices remain at their current level, people with permanent contracts will of course still be confronted with higher prices and a corresponding loss of purchasing power when their contract period expires.

I thought I should make inflation a little more concrete for the reader. To that end, I went through my readers' directory and compiled an estimated average daily consumption pattern based on the people I know. I looked for the price increase in March compared to March last year and also the price change that occurred between March 2020 and 2021. This comparison shows that some products that have become significantly more expensive in the last 12 months in the previous 12 months had become cheaper. If you do not recognize yourself in the consumption pattern, you can play around with the figures yourself via the link below. (Click on 'Edit table' and then on 'Spending categories' where you can reach a high level of detail. – The sad conclusion of my table is that people who consume a relatively large amount of wine suffer the least loss of purchasing power, while potato eaters are the worst off… ) 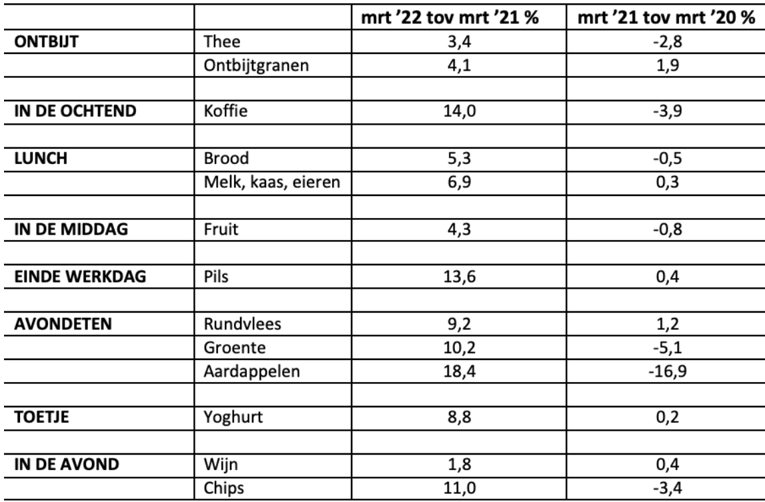 It doesn't look like inflation will fall any time soon. The war in Europe has seriously worsened the inflation outlook. Energy prices will remain high and if we or the Russians decide to turn off the gas tap(er) and/or reduce the oil supply, those prices will undoubtedly continue to rise.

Total energy boycott as a sanction

I read that by paying our oil and gas bill to the Russians we are financing the Russian military operation on balance. Well, that's how you can see it. For example, the Russians could say that with their supplies to us they are running our economy and keeping our homes warm while we are the enemy trying to hurt Russia's economy with heavy sanctions. There is also no way to get in the way. Fortunately, economists don't have to decide on this, but politicians. The European Parliament wants an immediate stop to the import of Russian energy carriers. With all due respect, doing so will inflict considerable damage on our own economy – it actually seems like a kind of economic harakiri to me – but maybe we should give it that. Would someone weigh up who would be more harmed by such a boycott, the Russians or us?

I also read that economists (in the west) predict a deep and prolonged recession in Russia. That may well be the case. The first indications of economic development in Russia after the war started are trickling in. The Purchasing Managers Index, which measures business confidence, plunged sharply in March, as the following picture shows.

Still, I'd be a little cautious about those predictions of a deep and protracted recession for now. The producer confidence index fell much more in 2020 than it does today and despite this, the Russian economy shrank by only 2.7% in 2020. Of course, this is just the beginning, and this time there may not be a V-shaped recovery. On the other hand, the increased oil and gas prices yield a significant trade-off gain for Russia. If you just look at oil, the effects are significant. Russia exports about 7.5 million barrels of oil per day. If the war prices for that oil yield about USD 20 per barrel more, the extra yield for Russia will be more than USD 50 billion on an annual basis. That is about 3% of GDP. And finally, part of the import disappears because we no longer want to supply certain items. That leads to problems, but fewer imports are positive for GDP if nothing else happens. We shall see.

Another development worsening the inflation outlook is China's tightened corona-related lockdown measures. China produces about 30% of all goods produced on Earth. The Caixin measure of business confidence in China's services sector shows the magnitude of the latest lockdown measures. The impact on the economy appears to be greater than with previous corona waves, except for the pandemic outbreak in 2020. That is obvious, and know that our lives have normalized, it is easy to forget that things are different elsewhere in the world. If the lockdown measures disrupt the production and supply of Chinese goods again, supply-chain problems will increase for us, with dire consequences for inflation.

The US is rocking on nicely

In the US, after all, the economy is still bouncing nicely. In the week of April 2, only 166,000 people claimed unemployment benefits, the lowest level since 1968 (when the population was, of course, a lot smaller).

US companies are also happily investing, as the following picture shows. Monthly figures on the value of capital goods shipped are a good proxy for business investment. I find it particularly striking how steadily the upward trend from the bottom in April 2020 is developing. After April 2020, the value of the capital goods shipped has only fallen in one month compared to the previous month. I must admit that price increases may also play a role here.

US: shipment of capital goods (USD billion per month, excluding defense and aircraft)

Interest rates are rising, house prices are not

Capital market interest rates are now rising sharply. The American 10-year yield was slightly below 1.20% in August last year and is now around 2.65%. Of course, inflation has risen much more, but the interest rate rise is still very strong from a historical perspective. Incidentally, most of that increase has been brought about in recent weeks. When the war broke out in Europe the rate was about 1.80%.

It is becoming increasingly clear that the US central bank has woken up from a kind of hibernation, realizes that inflation has gotten out of hand and that they are urgently going to do something about it. Interest rate hikes of 50bp are imminent and the shortening of the balance sheet inflated by bond purchases will be started with much more zeal than after 2014. On the one hand that is fine, because inflation needs to be brought under control, but a frantic drive carries the risk of overkill and recession. To be continued.

Dutch capital market interest rates show the same picture. In August last year our 10-year interest rate was still around -0.40%, we are currently close to 1.0% and a large part of the interest rate rise has also manifested itself in recent weeks. The NVM reported this week that house prices fell slightly in the first quarter. I also hear from a broker friend that there are fewer bids on houses after viewing days. Undoubtedly, the rise in interest rates plays a role in this. Starters who don't bring much of their own money are again out of the loop, I'm afraid. And you can say that affordable homes must be built urgently for this group, but construction procedures are long and building materials have risen even further in price. Can we still build homes that can afford first-time buyers?

These are very uncertain times. Ever-rising inflation is diminishing purchasing power, albeit not quite at the rate suggested by the inflation data. For the time being, inflation will not fall sharply either. Klaas Knot said this week in the House of Representatives that inflation will only decrease in September. He mainly looks at basic effects, I think. Of course, an early end to the war in Ukraine would be very welcome, not just for humanitarian reasons. Energy prices would likely fall, providing some relief. At the moment it doesn't look like that at all. And if the European Parliament has its way and there is a full boycott of Russian oil and gas, in addition to the already instituted boycott of coal from Russia, it will all become much more problematic for the economy.

Murphy's Law applies in the sense that the lockdown measures in China threaten to hit production there again. This will also increase inflation and further complicate the already difficult supply of goods.

While interest rate hikes are welcome for a variety of reasons, they will also have a negative impact on activity.