Google Translated from Dutch to English. Here is the link to the original article in Dutch. The article was originally published on 18 March 2022.

The economic figures that have been published so far all relate to the period before the war. But that will soon change. A first post-war indicator appeared this week at the German Zentrum für Europäische Wirtschafsforschung (ZEW). This organisation polls a group of approximately 300 experts in the financial sector every month about their expectations for the German economy. This so-called ZEW index fell from 54.3 in February to -39.3 in March. That was the most significant drop in a month since this series began in 1991. The first chart shows that sentiment among this group of experts is now comparable to the depressed mood after the pandemic outbreak. The assessment of the 'current state of the economy also fell, albeit significantly less, from -8.1 in February to -21.4 in March. How much this says remains to be seen. It is, of course, not impossible that those taking part in this survey have allowed themselves to be influenced by their emotions. There is now a lot of discussion in Germany about the risk of a recession. And since inflation is high, it quickly turns into stagflation. The uncertainties are significant, as emphasised again this week by Fed boss Powell, our own Klaas Knot and the CPB. 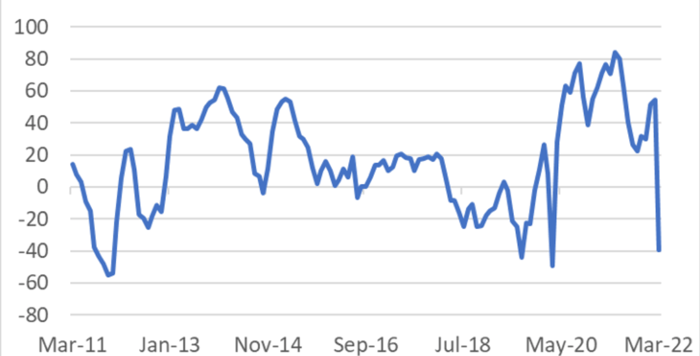 The US central bank, as expected, raised the official interest rate by 0.25% this week. The Fed has taken an unprecedented turn in recent months. In September, the median expectation by members of the Fed's policy committee was that they would raise interest rates once this year. By December, that had climbed to three rate steps, and at this week's meeting, the median year-end expectation for the Federal Funds Rate among members was 1.9%. That would amount to seven interest rate steps of 0.25%, or of course a smaller number of steps if one were to increase the interest rate by more than 0.25% at a time.

The latter seems entirely plausible to me. After all, inflation has gotten out of hand. It now stands at 7.9%, although the inflation measure the Fed considers most relevant, the price index of personal consumption expenditures, excluding food and energy, was 'only' 5.2 in January.

But at Fed chief Powell's press conference this week, he frankly admitted that inflation has risen much more and is proving much more persistent than the Fed expected. When asked how much the Fed is "behind the curve," he declined to answer. He also talked about the fact that the demand in the economy exceeds the supply, which causes inflation and that the interest rate increase is necessary to bring supply and demand more into balance. That demand would exceed supply, Larry Summers already calculated more than a year ago. Unbelievable that the Fed is only now noticing this.

I find the combination of the following three pictures interesting in this light. The first picture shows inflation and the central bank's actions in Brazil. When inflation rose above 5% last year, the central bank started raising interest rates. It has since increased from 2.25% at the beginning of last year to 11.75%. And only recently have interest rates risen above inflation again. This is a traditional image, as you might expect according to the textbooks. 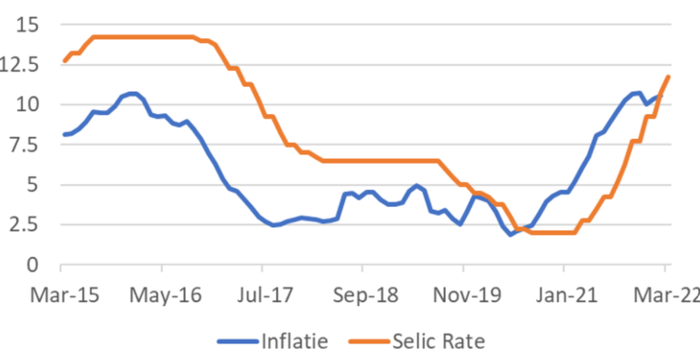 The next picture shows the same for the US. That's just a really crazy picture. You wonder what exactly they have been doing over there in Washington for the past few months. “Sitting down”, is an answer that imposes itself…

US: Inflation and official interest rate (%) 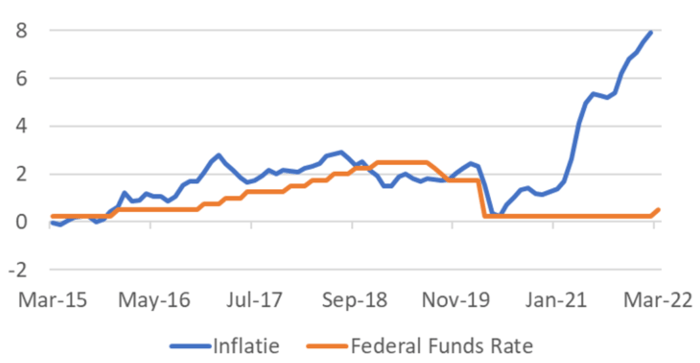 Perhaps even crazier is the picture of inflation in the eurozone and the ECB's interest rate policy, as the following picture shows. I won't mince words this time. Let me limit myself to noting that the ECB is in any case doing well on diversity and climate and that Ms Lagarde shows where she stands by wearing a button in the colors of the Ukrainian flag at the last press conference. 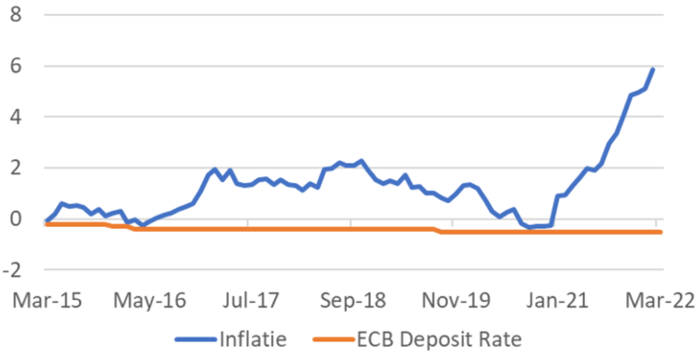 Perhaps even crazier is the picture of inflation in the eurozone and the ECB's interest rate policy, as the following picture shows. I won't mince words this time. Let me limit myself to noting that the ECB is in any case doing well on diversity and climate and that Ms Lagarde shows where she stands by wearing a button in the colors of the Ukrainian flag at the last press conference.

Fed chief Powell was asked during Wednesday's press conference whether he et al. would not risk pushing the US economy into recession if the central bank does indeed raise interest rates as much as policy committee members expect.

He didn't think so because the US economy is robust right now. The influence of the war in Europe will be limited, according to Powell, although it does create a lot of uncertainty. He pointed out several times that there are currently 1.7 job openings for every unemployed person and that the US job market has never been as tight as it is today. So the economy can withstand a rise in interest rates. I think Powell is right about that. But I would also like to point out that the economy has probably become more sensitive to interest rate rises. In 2019, it turned out that the economy could not handle an increase in the Fed Funds rate to 2.5%.

The following picture shows the absolute level of production in the US manufacturing sector. In February, production rose 1.2% from January and 7.8% from a year earlier, although the latter figure was flattered by a sharp drop in production in February 2021. Still, the chart shows see that production is at record levels. The high of this index of August 2018 has finally been surpassed. It's interesting what's going to happen next. Remarkably, production on balance completely stagnated between the beginning of 2015 and the end of 2019. Are we now entering a new growth phase? 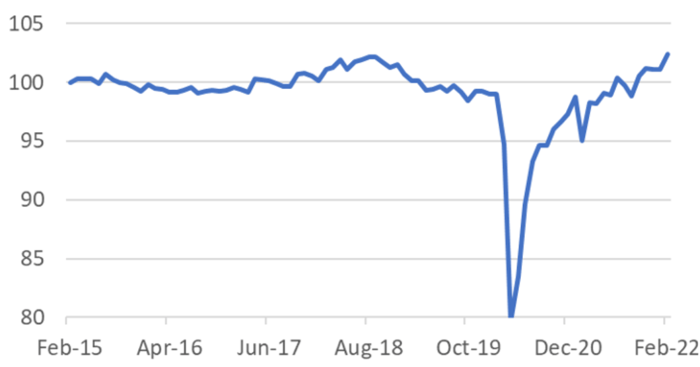 During the press conference, Powell further pointed to the healthy financial position of companies and families. While high inflation is eroding purchasing power, it is offset by accelerating wage growth and many households' savings since the pandemic's start. This will support consumer spending unless the war in Ukraine spoils sentiment to the point where consumers keep their purse strings. But that's not how I know the American consumer.

I know this is from before the war, but I want to report it anyway. Over the past few months, inflation in the US and Germany has stabilised at producer price levels. US producer prices in February were 10.2% higher than last year, from 10.1% in January to 10.0% in December. We don't have to cheer about that, but it could be relevant. Producer prices always rise and fall much more than consumer prices, and producer prices increased slightly earlier than consumer prices last year. So perhaps these numbers suggest that inflation has approached its peak. Unfortunately, the war in Ukraine will give further impetus to inflation. Hopefully, it's temporary. The situation is too uncertainabout makinge firm statements about it. The European gas price has recently stabilised between EUR 100 and EUR 110 MWHs.

Another bright spot from before the war is that supply chain disruptions eased somewhat. The New York Fed has put together an index that aims to measure the disorders. As the following picture shows, there was some improvement shortly before the war, although this index was still high. The fight will not have made the picture any better. 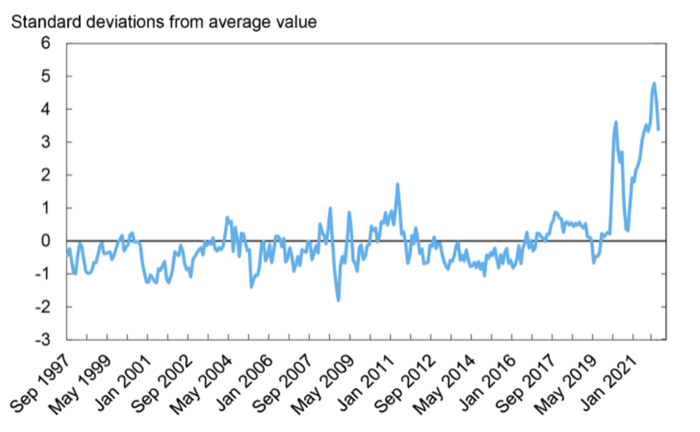 While inflation has risen sharply in our country, in the US and many other countries, this is more minor in Asia, as shown in the following two pictures with figures from Japan, China, Korea and Taiwan. In countries such as Malaysia and Indonesia, inflation is slightly above 2%; in the Philippines, it is 3%; in Thailand, it is slightly above 5% (the latter does); and in India, it is slightly above 6%. However, that is not the case for India very high. I did some digging into the underlying figures for Japan, but I can't quite put my finger on it. It seems that energy prices for consumers in these countries have risen somewhat less quickly than in our country. 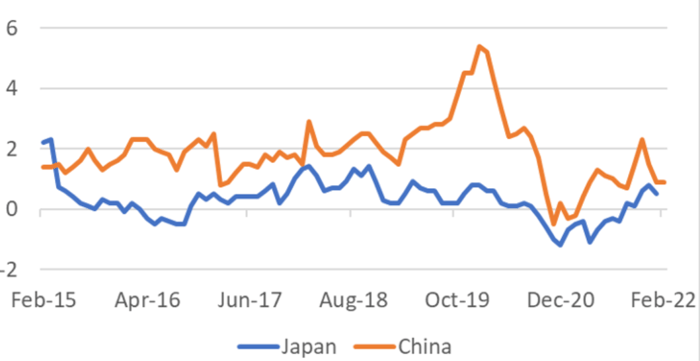 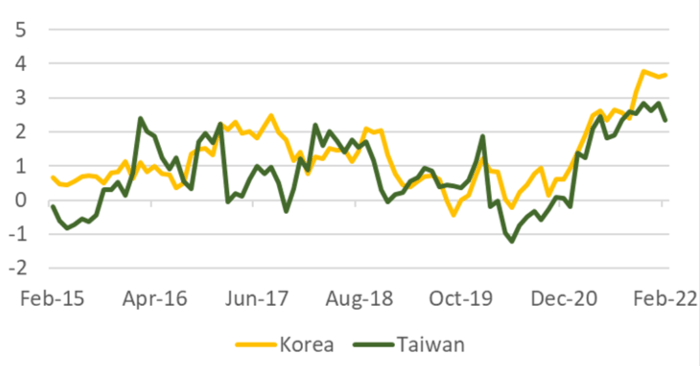 Regarding economic indicators, we have to draw the line at the start of the war. The figures from before the war have little relevance anymore. And we have hardly any figures from after the beginning of the war. That will, of course, change in the coming weeks. It is impossible to estimate how significant the economic damage will be in our kind of countries. Organisations such as the CPB and the Fed point out that, on balance, households have built up savings in the last two years. Even if consumers do not withdraw money from their piggy banks, a return to normal saving behaviour (i.e. a lower savings rate) can support spending.

The Fed has taken its first interest rate hike, and it looks like a whole series will follow. That will be time.