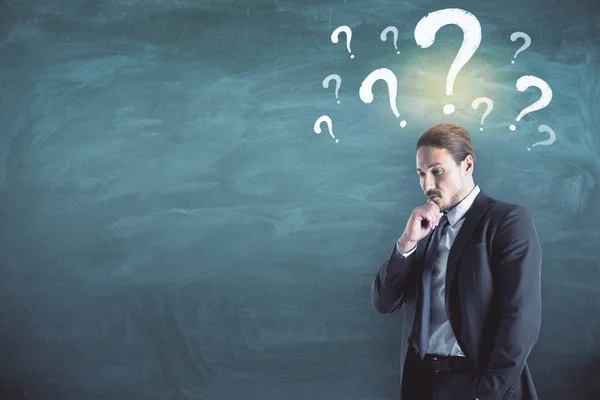 Where to Now with the Economy?


Google Translated from Dutch to English. Here is the link to the original article in Dutch. The article was originally published on 21 October 2022

For months, I have been proclaiming that we are heading for a recession and I am not alone. I get the necessary resistance from entrepreneurs in my circle of acquaintances. They are also not exactly common developments that we are currently experiencing. The 'echo' of the pandemic is still reverberating in the economy. But interest rate developments and energy prices are also making themselves felt.

The 'echo' of the pandemic has positive, negative and surprising influences on the economy. The main positive is, of course, that society is open again, albeit China is still plagued by local lockdowns. What is clear is that the logistics disruptions in the world are rapidly decreasing, see for example the Global Supply Chain Pressure Index of the New York Fed. 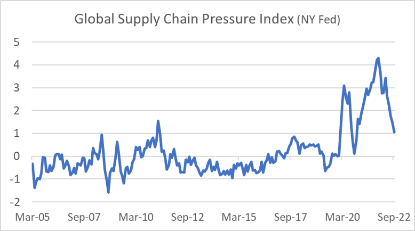 International freight rates are also currently falling. And that is also positive for the economy. Yet something very remarkable is happening here. As the following three pictures show, freight rates for the China-US (west coast) route are falling much faster than for other routes. I don't know why that is. In any case, things don't seem to be in Europe's favour. 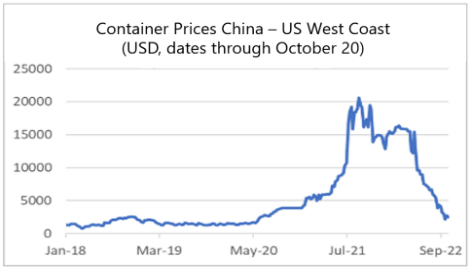 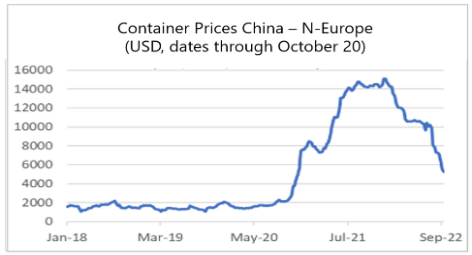 The sharp rise and still rising interest rates are now having a clear impact on interest-rate sensitive sectors. With us, the housing market seems to be making quite a turn and in the US it is no different. The fixed 30-year mortgage rate in the US was barely above 3% a year ago, but is now approaching 7%. This rise in interest rates is putting pressure on the entire housing market, i.e. prices, the number of transactions and construction activity. That is quite negative for the American economy.

On the other hand, the American industry doesn't seem to care. In September, manufacturing output grew 0.4% month-on-month and 4.8% year-on-year. The following picture shows the manufacturing index in the US. I think it's a remarkable picture. In the period 2015-2019 there was little dynamism in the sector. In fact, there was little or no growth at all. Of course, production fell sharply during the pandemic, but a very remarkable recovery has now taken place, the production level before the pandemic has been exceeded and this growth is continuing unabated for the time being. Could it have something to do with 're-shoring', bringing manufacturing activities back from abroad to the US?

In any case, it means that the US economy has more momentum and dynamism than ours and that they have a better chance of avoiding a recession.

Meanwhile, the gas price continues to surprise me. It now seems very likely that the build-up of stocks in Europe until the end of August contributed to the phenomenal price increase at the time. In the meantime, the stocks are almost completely filled and the price at the time of writing is about 65% lower than the peak towards the end of August.

At present, gas on the TTF is quoted at €116 MWh. That is not that far above the average of the fourth quarter last year: € 96.60. I never thought I'd write it down again, but a price of EUR 116 is good news. Especially for Mrs. Kaag, if she can keep her attention on public finances for a while. In the Netherlands, a price ceiling of €1.45 per cubic meter, including tax, will be set. The TTF market price corresponds approximately to €1.16 per cubic meter. The lower the market price, the less the price ceiling will cost the government. And of course the lower gas price also means that inflation and thus the erosion of purchasing power will decrease. Everyone happy. There is an important caveat here. It appears that large stocks of gas have been placed in Europe at exceptionally high prices. I'm curious how that will turn out for the consumer. Who's going to pay for this?

Consumer confidence continues to be negative, labour market is deteriorating

According to the CBS consumer confidence measure, the Dutch consumer was just as gloomy in October as in September, which was a historic record. If you want to see it sunny, you can say that it is nice that the trust has not crumbled further.

That more or less unchanged picture also emerged from the ZEW surveys. The ZEW polls a large number of economists, financial analysts, etc. on a monthly basis about the state of the economy and the prospects. The eurozone saw a very slight increase: -59.7 in October against -60.7 in September. For Germany, the expectations component improved from -61.9 in September to -59.2, but the assessment of the current situation deteriorated from -60.5 in September to -72.2 in October. These are minor changes for an indicator that can range from +100 (himmelhoch jauchzend) to -100 (zum Tode Betrübt).

Unemployment in our country remained stable in September: 3.8%. The labour market continues to be tight. Nevertheless, there was a slight deterioration in labor market conditions. The number of unemployed has grown by an average of 14,000 in the past three months. The last graph shows that the number of people who find a job from a situation of unemployment is decreasing. 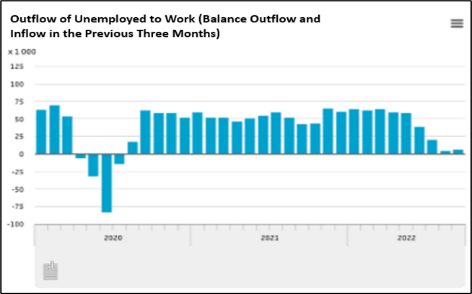 Whether the global economy, or perhaps just the European economy is in recession, has not become much clearer this week. I remain pessimistic about that. The erosion of purchasing power by the high inflation is such that it is inevitable that consumer spending in Europe will have to show a spring. Increased energy prices are also taking their toll on the manufacturing side of the economy. If inflation and energy prices, in particular, do not slow down the European economy, the blow dealt by higher interest rates may well do so. Of course, there is quite reasonable momentum, the gas price is now falling, logistics disruptions are easing (although intercontinental freight rates for Europe seem to be falling much less than for the US), people still have savings to draw on and the support packages will do work: support).

Because the US gas price has risen much less than ours, the prospects for the economy there are much better. The industry has been showing its best in the US lately, but interest rates are having a direct and significant negative impact on the housing and construction markets. The yield curve has historically been a reliable measure in forecasting US recessions. Every recession in the last 50 years has been preceded by an inverse yield curve, i.e. the interest rate on longer-term loans is lower than on shorter-term loans. Unfortunately, the picture is not clear-cut. The effective yield on 10-year government bonds has been lower than that on 2-year bonds since July. But the 3-month money market rate is more or less equal to the effective yield on 10-year bonds. I think the US still has a chance of avoiding a recession, but I think that chance is less than 50%.

Want To Implement Organisational Change? 5 Steps To Make This Happen

Don't Waste Time! 5 Components Until You Reach Your Successful Career