Last week I did something I've never done before. On Friday, I watched the press conference given by the Bank of Russia, Russia's central bank, after their last policy meeting. This can be seen in a (small) YouTube film with simultaneous translation, which can be found on the site of the Bank of Russia.

We are trying to harm the Russian economy by applying sanctions so that they stop this terrible war. Such a central bank press conference can provide interesting points of view in that light

Google Translated from Dutch to English. Here is the link to the original article in Dutch. The article was originally published on 2 May 2022.

Elvira Nabiullina is said to be a close confidant of President Putin, but also the celebrated and admired central bank president in the West. She has held her current position since 2013, and has done a major clean-up of Russia's fragmented banking system, but is seen most of all as the one who decisively pulled the Russian economy out of the 2014/15 crisis.

Now she must steer the Russian economy through the war and sanctions. She speaks an understandable language. During the press conference last Friday, Nabiullina was assisted by Vice President Alexey Zabotkin, who made a remarkably active contribution.

The journalists present should certainly not have it in their heads to show something of a protest against the war, but I thought that the questions were quite critical and that the whole thing came across very naturally.

Another journalist asked if the Bank of Russia is sending rubles to the "liberated areas" in Ukraine so that the economy there can run on the Russian currency. This question was not answered or the answer "was lost in translation".

The atmosphere during the press conference also seemed remarkably relaxed. At the ECB, a small army of photographers has the opportunity to take pictures at the start of the press conference, but at the Bank of Russia, at least one photographer walked through the room during the entire conference. I thought it was nice that he was armed with photographic equipment from the American Canon, although I doubt whether a subtle message was hidden in it.

Now, of course, it was about the economy and policy, so I have to talk about that. Immediately after the outbreak of the war, the ruble exchange rate fell sharply. This posed a threat to financial stability and would boost inflation, quite apart from the impact of rising commodity prices (in dollar terms), supply chain problems and sanctions. The central bank then raised its key interest rate from 9.5 percent to 20 percent.

Naturally, foreign exchange regulations were also introduced. These measures have proved astonishingly effective in stabilizing the ruble, which is now back to pre-war levels, not to mention that the dollar has appreciated against most other currencies since then.

Incidentally, Nabiullina and Zabotkin explained the strength of the ruble mainly with the large current account surplus of Russia's balance of payments, which means that there is more demand for rubles than supply. According to Nabiullina, that surplus will reach a record $ 145 billion this year, although she added that this is partly due to the sharp drop in imports.

Regardless, the strength of the ruble enabled the Bank of Russia to cut interest rates last Friday. Nabiullina also reported that inflation expectations, which had risen sharply immediately after the outbreak of the war, are now falling again. A reduction from 20 to 17 percent had previously been implemented, but a further reduction to 14 percent was decided on Friday. Things seem to be normalising. What does that say about the effectiveness of our sanctions?

Exchange rate: rubles per US dollar 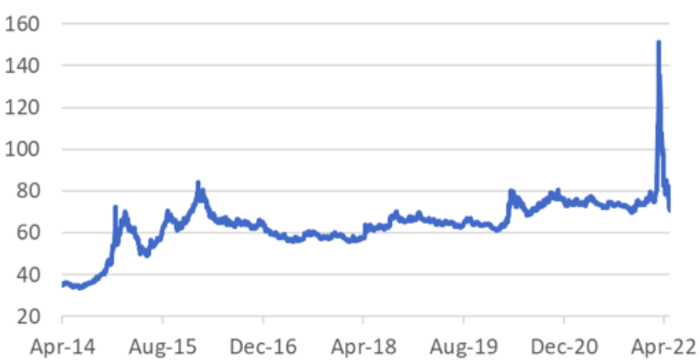 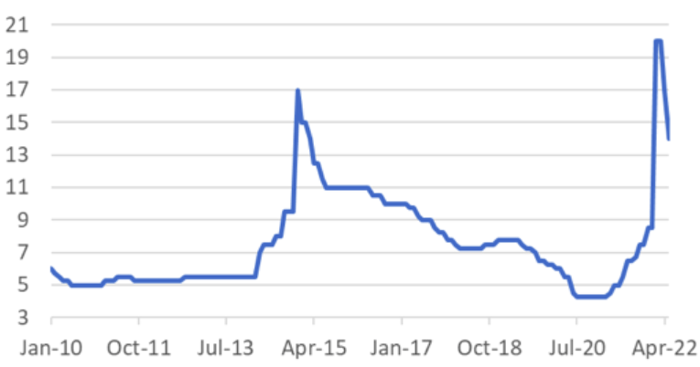 Inflation rose to almost 17 percent in March, but according to Zabotkin there are signs that the worst rise in inflation is behind us.

That's not to say there aren't economic problems. Nabiullina was remarkably realistic. The Bank of Russia estimates the economy will shrink by 8 to 10 percent this year and spoke quite extensively about the problems caused by the sanctions.

But she also spoke about the process of adjustment in the Russian economy. Companies that no longer receive deliveries from the west have to look for partners and suppliers elsewhere. And employment will have to undergo a structural change.

Don't tame inflation with a stranglehold'

Although Nabiullina wants to give top priority to achieving low inflation, which is “critical for steady growth”, she argued that the structural adjustment that the Russian economy will have to make a will by definition be accompanied by higher than normal inflation. It will therefore not try to tame inflation with some sort of stranglehold.

They all seem like wise words to me and I especially feel that it is a great pity for us that the Russians have such a capable president of their central bank. 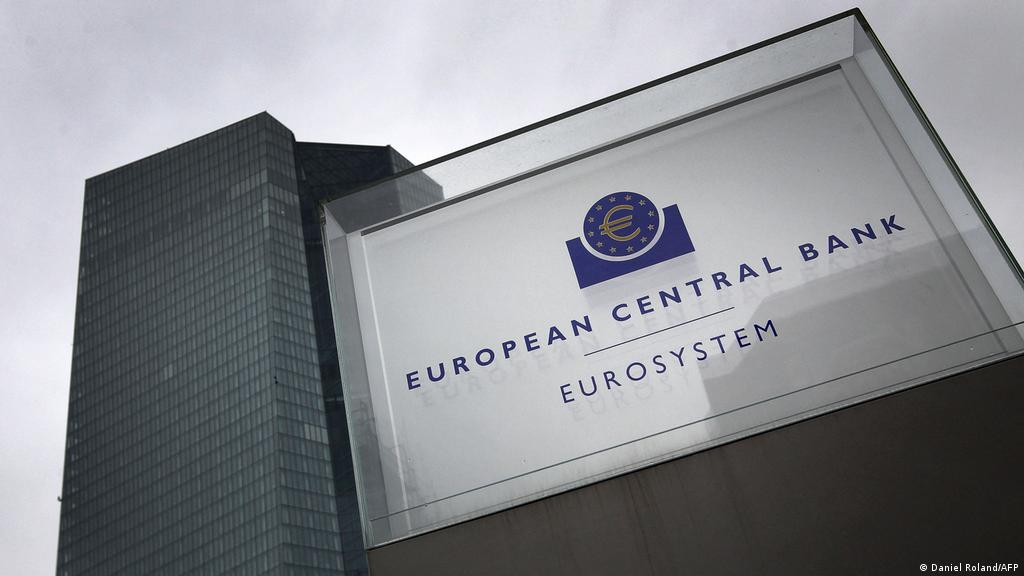